Donald Trump doesn’t get why minorities are scared 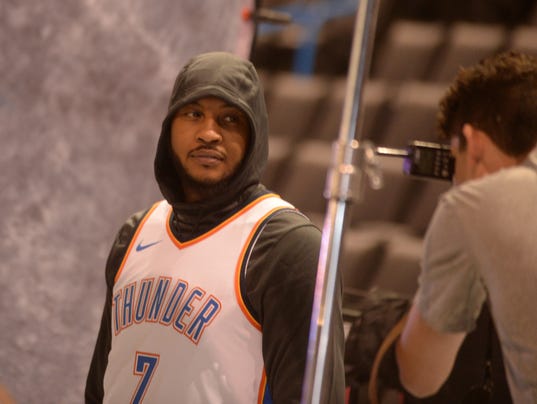 Puerto Rico. The NFL protests. The endless tweets from President Trump that add to the growing fear Anthony has for people who look like him.

But as the 10-time All-Star surveyed the surreal scene at Chesapeake Energy Arena on Monday, his trade from the New York Knicks to the Oklahoma City Thunder having been finalized just in time for training camp, he became the latest professional athlete to express his frustration with the current administration.

“I just think it’s wrong, to be honest with you,” he told USA TODAY Sports. “I just think it’s silly. It just shows that you don’t really have a care for the fear that the minorities have in our country right now. You don’t really understand. You don’t get it, like what it’s like being a minority. You don’t understand that people are scared. People are afraid. People don’t know what’s going on, and there’s so much going on they don’t know how to feel. I think all we’re looking for is some kind of security blanket that – at the end of the day – you have our back. And you’re showing that you don’t.”

The 33-year-old Anthony has not only become one of the NBA’s leading voices on social issues, but someone who routinely encourages athletes to speak out against injustice rather than stay silent for fear of hurting their personal brands. In April 2015, just days after 25-year-old Freddie Gray died from injuries sustained while in custody of the Baltimore Police Department, Anthony walked the streets of his hometown in protest.

In July of 2016, after the police killings of Alton Sterling (in Louisiana) and Philando Castile (in Minnesota) led to a Dallas protest in which a sniper killed five police officers and injured seven more, Anthony took his most prominent stance. He stood alongside LeBron James, Chris Paul and Dwyane Wade as they opened the ESPYs awards show with a moving speech about police brutality, the growing racial divide, and the value of activism and community outreach. Weeks later in Los Angeles, he joined with members of the Los Angeles Police Department, community leaders and young people at the Challengers Boys & Girls Club for an open forum in which they discussed the relationship between law enforcement and citizens.

On Friday, he directed his attention to his father’s homeland in Puerto Rico, where Hurricane Maria has decimated the island of more than three million people. Anthony, who donated $50,000 to the recovery efforts and asked for help by way of a video on the Player’s Tribune web site, is working with local officials in an attempt to increase exposure and assistance. And as is the case on so many fronts these days, he wishes Trump would spend more time helping people heal rather than fueling a divide.

“I’ve started kind of a ‘YouCaring’ page…just trying to raise the funds to kind of bring Puerto Rico back and help Puerto Rico by any means necessary,” Anthony said at his first Thunder news conference. “I’m committed to my island, to help everything. I’m talking to the government officials down there. I’m talking to all these organizations, just trying to figure everything out. I don’t want to just do something just to do it. I want it to be meaningful. I want the people to feel impacted by what I’m trying to do, what I’m trying to create.