Hugh Hefner’s ‘Playboy’ company lives on, though as a shadow of itself

Inside the historic Playboy Mansion, there are six lavish bedrooms, a pool, a tennis court and even zoo facilities. Even after Hugh Hefner’s death, it’s clear, the property will continue to be a prominent Los Angeles location.
USA TODAY 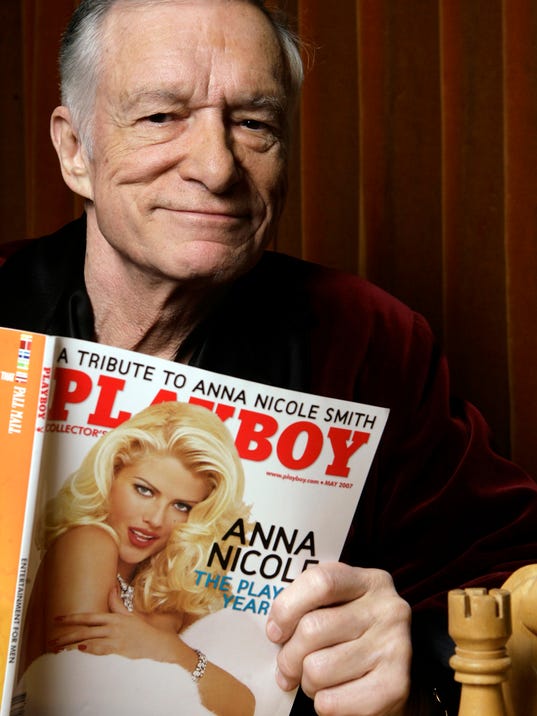 Hefner posing for a photo at the Playboy Mansion in Los Angeles in 2007.(Photo: Damian Dovarganes, AP)

NEW YORK — Playboy Enterprises has outlived the founder of its iconic magazine, though largely as a shadow of its former self.

Hugh Hefner’s Playboy, a magazine founded to celebrate his “Playboy Philosophy” of sexual freedom, influenced sexual mores and popular culture for decades. A business empire grew out of that, but it’s shrunk considerably over the years. It now lives on primarily as a set of bunny ears slapped on products around the world.

Hefner died earlier this week at 91.

The magazine itself, whose circulation peaked in the 1970s at 7 million, is now seen as more of a marketing tool that supports the licensing operations at the heart of the modern company.

“The magazine is sort of the tiny part of the equation now,” said Samir Husni, director of the Magazine Innovation Center at the University of Mississippi.

In this Dec. 18, 2010 file photo, waitresses pose inside the Playboy Club at the Sands Casino in Macau. Playboy had millions of readers at its peak in the 1970s and a wide-ranging influence on sexual mores and popular culture. Today the magazine is a bit part in the Playboy empire, which is reaping the rewards of its famous bunny logo. (Photo: Kin Cheung, AP)

More: With Hugh Hefner gone, here’s the future for the Playboy Mansion

Playboy, born in 1953, is still putting out print issues. But today its circulation has fallen below 500,000, according to industry tracker the Alliance for Audited Media.

The free-for-all of Internet publishing that has squeezed the newspaper and magazine industries has done likewise for Hefner’s brainchild. Pornography for just about any taste or flavor is now available for free online.

For those who read Playboy for the articles … well, there’s no shortage of compelling journalism spread across the internet and available in your Facebook newsfeed.

Playboy founder Hugh Hefner has died at age 91. For decades, Hefner was known as the pipe-smoking hedonist who revved up the sexual revolution in the 1950s and built a multimedia empire. Playboy says Hefner died of natural causes at his home. (Sept. 28)
AP

Media reports from spring 2016 said that Playboy was looking to sell itself for $500 million, more than double the price paid in 2011. Private equity firms typically acquire troubled companies, then try to slash costs, improve profitability and resell them for a higher price.

Playboy didn’t end up selling itself, but made a string of changes anyway. Flanders left, and the CEO now is Ben Kohn, a managing partner at Rizvi Traverse, Playboy’s majority owner.

Hefner’s son Cooper, then 24, was brought in as chief creative officer in July 2016. Then the company sold the Playboy Mansion for $100 million to next-door neighbor Daren Metropoulos, owner of Hostess (maker of Twinkies, Ho Hos and Ding Dongs).

The magazine reversed itself on its no-nudes policy earlier this year, saying nudity was part of its identity.

Playboy Enterprises today pulls in most of its revenue from licensing its brand — its name and those instantly recognizable bunny ears in a bow tie — for everything from perfume bottles to men’s shoes. It wants to once again conjure up a hip and sexy image, leaving behind the cheese factor that’s become associated with it in the U.S. The biggest market is Asia, and Playboy says it has been particularly successful in China.

“Playboy isn’t just the magazine — the brand has evolved to become a ‘lifestyle’ brand with a luxurious, smart, and cultured image,” Karina Masolova, executive editor of the trade publication The Licensing Letter, said in an email. “The branded merchandise is always going to sell (at least decently well) in the mature American and European markets.”

Masolova added that while the Playboy brand’s growth may be tapped out in the U.S. and western Europe, Asia is a bright spot where Playboy is cultivating a premium image in men’s fashion.

The magazine also has an international presence with 25 foreign editions, with Germany the largest, and owns a subscription adult-entertainment channel, Playboy TV, available in more than 60 countries. A string of Playboy Clubs still dot the world; one is even opening in New York later this year, complete with Bunnies, more than three decades after the original New York club closed.

Still, as a private company, Playboy’s finances are opaque. In its last year as a publicly traded company, revenue fell 10.5 percent to $215 million in 2010, and it had posted three years of annual losses. Its finances then point toward Playboy’s direction today: licensing fees weren’t the biggest revenue source, but they accounted for nearly all the profit.

Some think it is too late for a Playboy resurgence, and say the brand will never approach the prominence and influence it once had. “The times have passed Playboy,” Husni said. “Without a customer base, without consumers, there is no magazine. With no magazine, there’s no brand.”