President Trump arrives at the White House on Aug. 23. On Wednesday, Trump is visiting Springfield, Mo., to promote Republican efforts to overhaul the tax code. 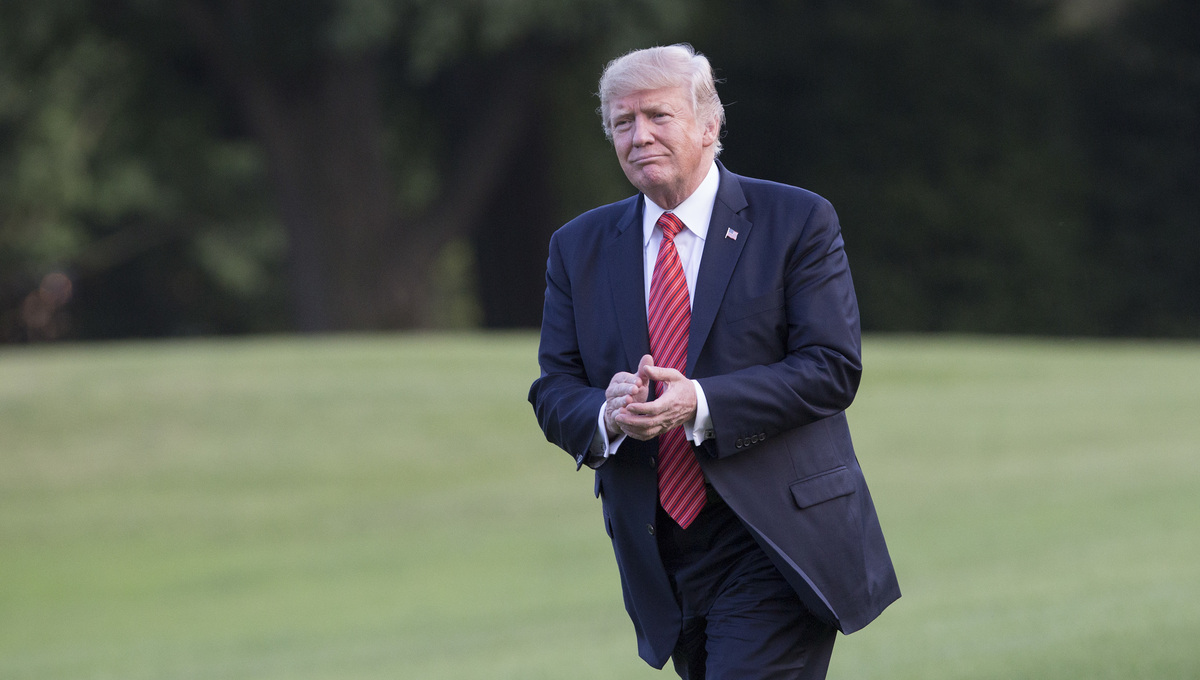 President Trump arrives at the White House on Aug. 23. On Wednesday, Trump is visiting Springfield, Mo., to promote Republican efforts to overhaul the tax code.

President Trump will call for a major rewrite of the U.S. tax code when he visits Springfield, Mo., on Wednesday afternoon. The speech comes a day after Trump’s trip to Harvey-hit Texas and is the first in what is expected to be a series of traveling sales pitches on taxes from the president.

But the White House is not ready to spell out what the rewrite will look like or what kind of price tag it will carry.

Treasury Secretary Steven Mnuchin and National Economic Council Director Gary Cohn have been meeting regularly with Republican congressional leaders to discuss tax policy. Thus far, though, they’ve only committed to a vague statement of principles which calls for lower tax rates on both individuals and businesses. Cohn said it will be up to lawmakers to fill in the details.

“We’ve got a great, I would say, skeleton,” Cohn told reporters earlier this month. “We need the Ways and Means Committee to put some muscle and skin on the skeleton and drive tax reform forward. And it’s our objective to do that between now and the end of the year.”

With Republicans in control of the House, Senate and the presidency, supporters have described this as a once-in-a-generation opportunity to overhaul the tax code in accordance with GOP principles. But after Trump’s insistence on swift, ultimately unsuccessful bids to repeal the Affordable Care Act, some observers are skeptical that Trump has the patience or discipline to see a tax overhaul through to completion.

“He’s going to go on the road,” Mnuchin said. “The president is 100 percent supportive of us passing legislation this year.”

The White House has been promising such a sales campaign for weeks, only to see much of August consumed with controversy over the president’s Charlottesville, Va., remarks and his intra-party carping with fellow Republicans, including Senate Majority Leader Mitch McConnell, R-Ky.

Mnuchin conceded rewriting the tax code is a taller order than he initially imagined.

“Earlier in the year I said I thought we’d get it done by August, and I was wrong,” the treasury secretary admitted. “I am now going to say that I’m very hopeful, and I think we can get this done by the end of the year, but we will continue to revisit it.”

“The president’s leadership on this is critical,” said a senior White House official who briefed reporters on the Springfield trip. “Everybody involved understands that and believes that. And he is ready to really take this conversation where it belongs and that’s the heartland of America.”

The official spoke on condition of anonymity.

“The president now feels that it’s the right time to begin engaging directly with the American people on tax reform,” he said.

The administration argues the current tax code is too complicated and rates are too high to encourage investment in the U.S.

“We are not competitive with the rest of the world on the business tax and on the personal income tax,” Cohn said.

Neither the White House nor congressional leaders have spelled out how much lower tax rates should go, nor have they specified how the government would make up the lost revenue. They’re counting on faster economic growth to help close the gap. They’ve also promised to eliminate unspecified tax “loopholes.”

Back in April, the White House proposed lowering the corporate tax rate from 35 percent to 15 percent while reducing the top individual tax rate from 39.6 percent to 35 percent. That’s broadly similar to a proposal Trump put forward during the presidential campaign. The nonpartisan Tax Policy Center said at the time 78 percent of the tax savings in Trump’s campaign plan would go to people on the top 20 percent of the income ladder. (Nearly a quarter would go to the top one-tenth of one percent.)

The campaign plan was also forecast to reduce government revenue by more than $6 trillion over a decade — a gap that would be difficult to erase through growth and loophole closings.

The White House has said it wants to preserve deductions for charitable contributions, retirement savings and mortgage interest.

One popular tax break that could be on the chopping block is the deduction for state and local taxes. That’s one of the biggest loopholes in the tax code. Eliminating it would boost federal revenues by an estimated $1.3 trillion over a decade. The tax break is particularly popular with residents in the Northeast and West Coast, typically blue states with relatively high tax rates.

House Speaker Paul Ryan, R-Wis., favored a so-called border adjustment tax on imports as another way to raise revenue and offset the cost of income tax cuts. But lawmakers ultimately scrapped that idea after consultation with the administration.

Senate Republicans plan to use a procedural tactic to prevent Democrats from blocking the tax overhaul with a filibuster. Under Senate rules, though, any measure passed with that tactic must not add to the federal deficit for more than 10 years.

This presents a choice for Republicans: Go with a more modest tax cut that can be offset by growth and closing loopholes, or opt for a more ambitious cut but allow it to sunset after a decade.

For all the challenges, GOP lawmakers are under political pressure to pass something they can brand as “tax reform.” Otherwise, they’ll have to face voters in 2018 with little to show for two years of single-party rule.

Could a simple tax solve the housing crisis? · TheJournal.ie

Infrastructure, not tax, the ‘key issue for Brexit influx’