What has caught some by surprise is the pace and scale of his listed companies’ recent moves into non-property investments overseas, and the use of its property flagship Cheung Kong Property (CKP) to lead such investments within the group.

Even when property and land prices were not as high in Hong Kong and the mainland two years ago as they are now, Li said the firm was finding it a challenge to identify property investments “with reasonable returns”.

This amounted to 54 per cent of the HK$190 billion that Li’s companies have spent in the past six years on infrastructure and energy investments, according to a tally by the South China Morning Post of the publicly announced deals. 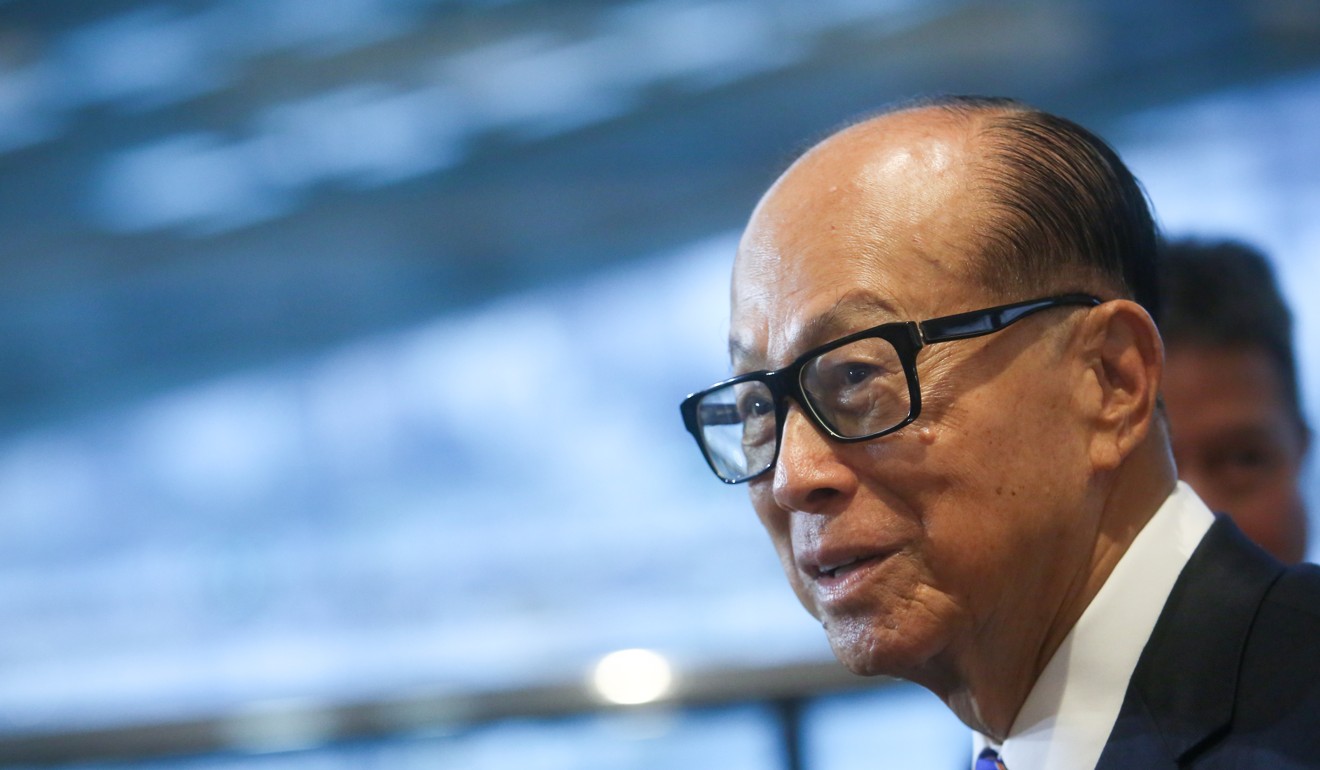 “It is a reflection of risk aversion; what Li’s companies have been trying to achieve is slowly exiting from Hong Kong and China assets, especially cyclical assets like properties, and putting the money into businesses that provide more stable cashflows in markets outside this region,” UBS head of Asian utilities research, Simon Powell told the Post.

Li, one of Asia’s richest men, said in his chairman statement on CKP’s interim results filing on Thursday that the company had “a firm commitment to establishing a strong recurring income base” through “globalisation and diversification initiatives”.

On top of infrastructure and energy assets, CK Hutchison, then known as Cheung Kong (Holdings) before a restructuring to delineate the group’s property business from non-property ones, entered the aircraft leasing business in late 2014.

After buying the business from CK Hutchison for HK$7.6 billion in December last year, CKP said in the results filing that as of June 30 this year, it owned 71 aircraft and had committed to buy another 43 for HK$15.6 billion.

Such is the clarity of CKP’s diversification strategy that it will be enshrined through a proposed name change that will take effect later this month, upon obtaining shareholders’ approval.

The company said it would be renamed CK Asset to “better reflect [its] strategy to achieve long-term sustainable business growth and value creation … [through] the pursuit of quality investments worldwide with stable recurring revenue, such as infrastructure [and] property investment and aircraft leasing.”

The risk management-oriented diversification means CKP is willing to lower its profit margin in exchange for lower earnings volatility.

It is a reflection of risk aversion; what Li’s companies have been trying to achieve is slowly exiting from Hong Kong and China assets, especially cyclical assets like properties, and putting the money into businesses that provide more stable cashflows in markets outside this region

CKP achieved a profit margin of 42 per cent on a pre-tax and interest expense basis on its property development projects booked in this year’s first half, far higher than CKI’s 32 per cent on the same basis, a bellweather in the infrastructure sector.

Until October last year, before the flurry of non-property acquisitions, Li’s companies have sold seven large property projects on the mainland with a combined value of 43.4 billion yuan. In contrast, they have hardly invested in new projects since 2012.

The Cheung Kong companies’ conservative approach to land acquisition in both Hong Kong and China, and their increased divestments on prime real estate assets, as well as stake sell-downs in some operations that deliver stable returns, including power supplier Hong Kong Electric and consumer goods retail major AS Watson in recent years, have coincided with accelerated overseas investments.

The moves had drawn criticism – including an editorial in the People’s Daily, the mouthpiece newspaper of the Communist Party – that Li was abandoning his home market and the motherland as economic growth slowed and uncertainties loomed, which Li promptly rejected.

“People often said we are retreating from China, but in the several decades until today, we have never sold a single piece of vacant land,” Li Ka-shing told reporters in March last year.

“Each piece was sold after it had been developed.”

CKP has made over HK$100 billion of investments over the years, he noted, adding that it had plenty of land in the mainland.

Still, according to its results filing, its development land bank on the mainland had shrunk to 114 million square feet by June 30 this year, from 149 million sq ft two years earlier, while that in Hong Kong fell from 7.5 million sq ft to 6 million sq ft over the same periods. 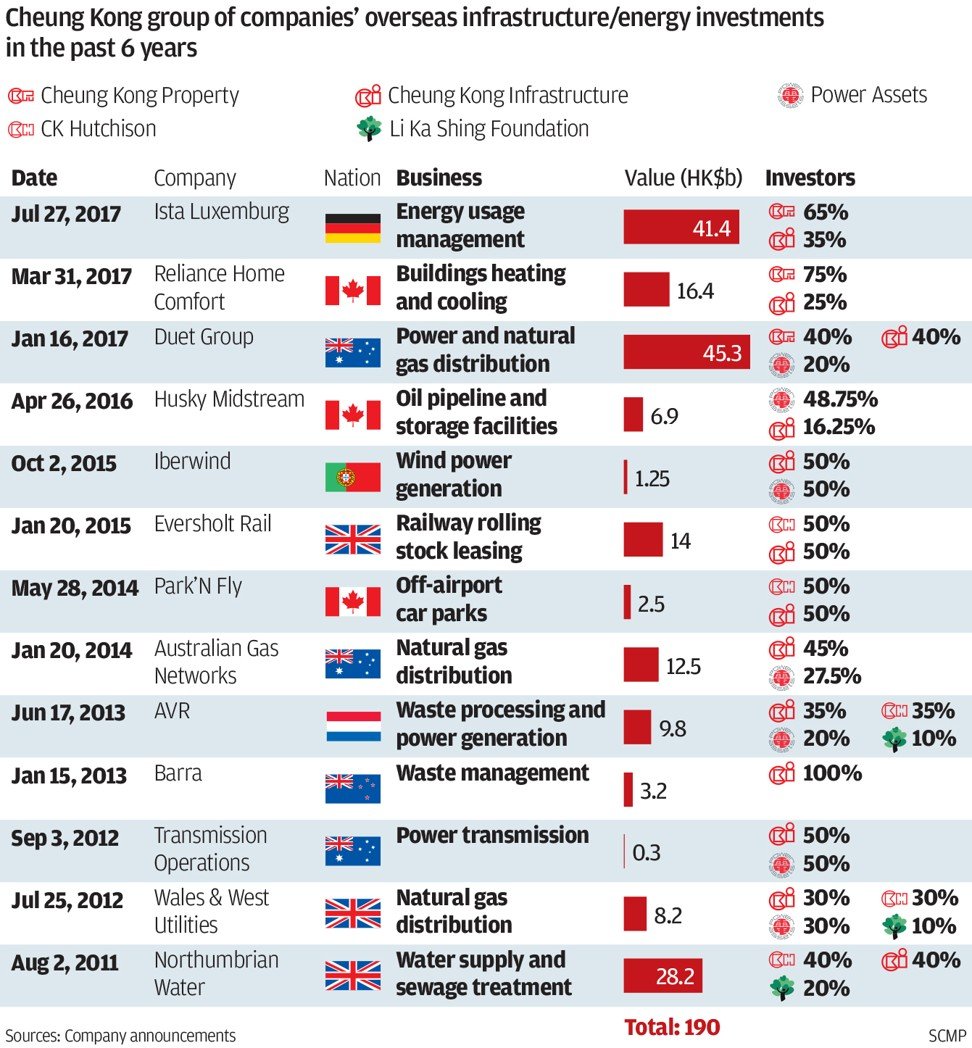 According to Daiwa Capital Markets head of property research Jonas Kan, CKP is “in the mode of monetising the abundant land it bought in Hong Kong and China in the past”.

Despite achieving over HK$40 billion in property sales in the first half of this year, spending nearly HK$7 billion to buy back its own shares and clinching three major energy infrastructure investments this year, Kan estimated its net debt would amount to only 5.1 per cent of its shareholders’ equity by the end of this year.

The investment strategy shift of CKP has negative implication for minority shareholders of energy projects investment firm Power Assets – 38.9 per cent-held by CKI.

Power Assets has been increasingly marginalised as an investment vehicle within the Cheung Kong companies for energy-related investments, which are its core business.

Despite having a HK$41.9 billion cashpile from its stake sale-down in power utility Hongkong Electric that could be reinvested for better returns than keeping it as bank deposits , Power Assets was bypassed in the Home Reliance and Ista deals.

Instead, it provided the cash in the form of special dividends declared to help CKI fund the acquisitions. 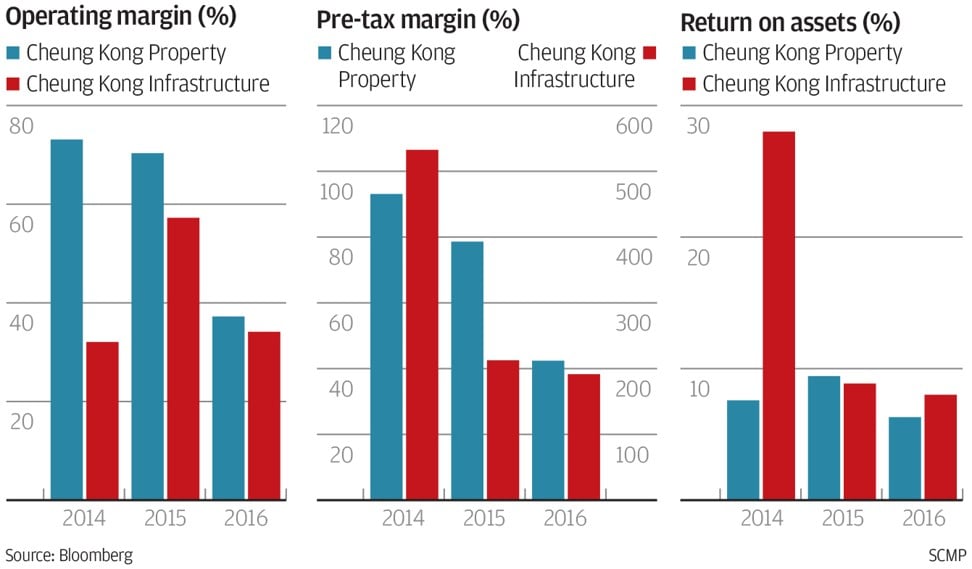 UBS’ Powell said he noted that CKP’s bigger balance sheet and the financial muscles make it a better frontman to bid for energy and infrastructure-related businesses abroad.

“The big question was why Power Assets was left in the cold?” he said.

Both Powell and Daiwa’s head of utilities and renewables research, Dennis Ip said given that CKI and Power Assets co-invested in most of Power Assets’ overseas projects, the latter had become a “redundant” listed vehicle, and Power Assets would probably not partake in the Cheung Kong group’s future overseas energy and infrastructure investments.

In 2015, a proposal to merge CKI and Power Assets was rejected by Power Assets’ minority shareholders who thought the deal wasn’t attractive enough.

Powell said CKI might initiate another merger attempt in the longer term if Power Assets’ cash was further drained through more dividend payouts and if the lack of acquisition prospects depressed its share price.

“We believe CKI will be the main focus on mergers and acquisitions within the Cheung Kong group, and CKI will be involved in almost every infrastructure-related acquisition carried out by the group,” Ip said.

However, if the property market entered a downturn with rising interest rates in the longer term and asset prices become attractive again, CKP could sell its stakes in non-property assets to CKI to fund real estate purchases, he told the Post.