5 dead in Arunachal, 2 in Assam as rains continue to pound parts of Northeast | Latest News India

The Pound to Dollar rate rallied more than 150 points after the Federal Reserve appeared to rule out for the time being any prospect of it raising U.S. interest rates in increments larger than 50 basis points while also taking a more cautious than expected approach to quantitative tightening (QT).

Dollar exchange rates burst like a dam giving way to water after the Fed lifted the Fed Funds interest rate by 50 basis points to between 0.75% and 1% late on Wednesday before confirming that markets were right to wager heavily of late that a series of these larger than usual steps could be taken this year.

But losses built quickly after Chairman Jerome Powell told CNBC’s Steve Liesnan in the subsequent press conference that “a 75 basis point is not something the committee is actively considering,” and that additional 50 basis point increases would instead be on the table at the next “couple of meetings.”

“Financial markets appeared to react to the fact that the Fed was not considering 75bps hikes – something that was little more than a risk case,” says David Page, head of macroeconomic research at AXA Investment Managers.

The Pound to Dollar exchange rate rose a percent on Wednesday to a high of 1.2638, before retracing some of those gains to quote at 1.2561 on Thursday, just hours ahead of the Bank of England’s expected 25 basis point hike.

Prices in some financial markets had implied before Wednesday’s decision that investors were already fully expecting the Fed to raise its interest rate in increments of 0.5% on at least the next two occasions, and this may be part of why the Dollar sold off sharply following Chairman Powell’s remarks.

However, the Fed did also elect for what was effectively ‘plan b’ rather than its initially favoured approach to the now formally announced and forthcoming effort to shrink its balance sheet – and so also the level of stimulatory liquidity within the financial system from near $9 trillion.

“We’ll be mindful of the broader financial and economic contexts when we make the decision on timing,” Chairman Powell had said in the March press conference.

Minutes of the March meeting had suggested in April that the Fed’s balance sheet would initially shrink by $95BN per month but also made clear that a more cautious phase-in approach would be taken and starting from lower levels “if market conditions warrant,” by the time of the announcement.

However, the Fed did this Wednesday announce a plan that will see the bank start off in June by allowing its asset holdings to shrink by a lesser $47.5BN per month for the first three months at which point the monthly reduction of the portfolio would increase to $95BN. 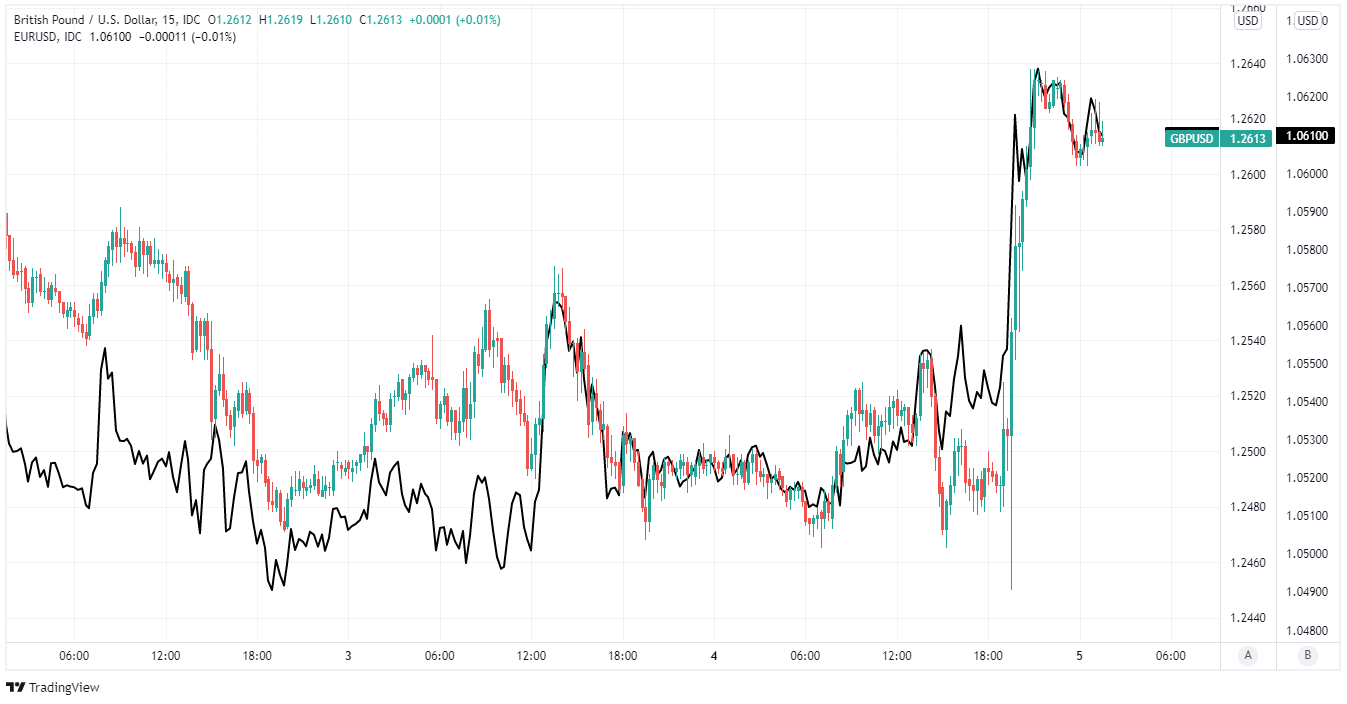 Above: Pound to Dollar exchange rate shown at 15-minute intervals and alongside EUR/USD. Click image for closer inspection.

“The Committee is prepared to adjust any of the details of its approach to reducing the size of the balance sheet in light of economic and financial developments,” the Fed said in a separate announcement.

The slower phase-in approach is potentially a recognition by the Fed of the appreciable tightening in overall “financial conditions” that has taken place since the last meeting and which boasts as symptoms broad losses for stock markets, a monstrous surge in bond yields and a vicious U.S.Dollar rally.

“No doubt that removing 75bp out of the equation at this time will certainly get folks excited about long duration and long stocks trades, at least tactically. That process, if it pans out, could take the edge off the USD further,” says Mazen Issa, a senior FX strategist at TD Securities.

“For this to happen, we think the market will need to see more evidence of a topping and moderation in inflation. This will place the next two CPI reports directly in the limelight, which the Fed will have by its next meeting. Until then, we are wary that a soft USD can truly prevail,” Issa adds.

Previously, the U.S. Dollar Index had rallied to its highest since 2003 while toppling other currencies like dominoes in the process including Pound Sterling, the Euro, Japanese Yen, Chinese Renminbi and many others, and to a potentially uncomfortable extent for some other central banks. 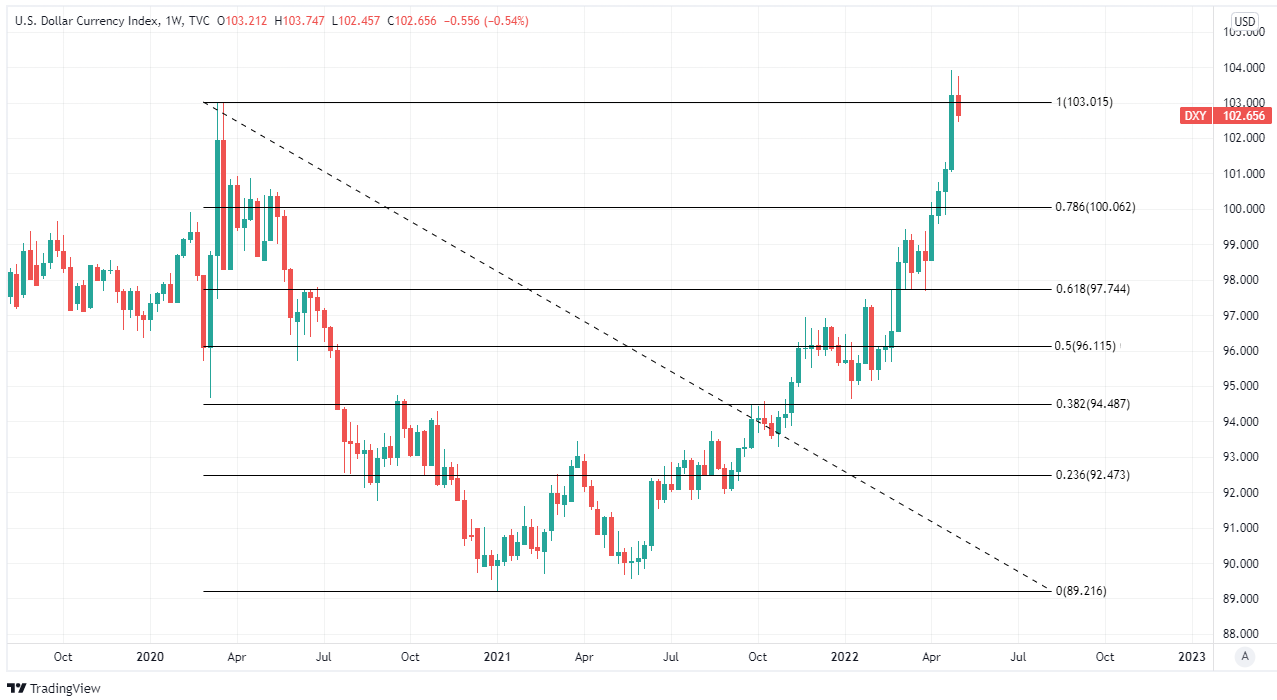 Losses for other currencies were an inflationary headache of the kind that risks pushing the European Central Bank (ECB) and Bank of England (BoE) to lift their interest rates sooner or faster than they otherwise might elect to.

There is also the possibility that Dollar strength and U.S. bond yields led the People’s Bank of China (PBoC) to hesitate about providing stimulus in China where coronavirus containment measures are hastening an earlier slowdown.

Meanwhile, those factors were almost certainly the dominant drivers of the Japanese Yen’s recent fall to its lowest since 2002, which has unnerved the Ministry of Finance in Tokyo, leading to frequent statements of concern.

“GBP/USD was given a boost by the FOMC and is higher near 1.2635.  We expect the Bank of England (BoE) to raise the Bank rate by 25bp to 1.0% at tonight’s meeting (9pm Sydney time). Nevertheless, we expect the BoE to strike a dovish tone,” says Carol Kong, a currency strategist at Commonwealth Bank of Australia.

“The updated forecasts will reflect the BoE’s assessment of the war’s impacts on the economy. We anticipate a downward revision to GDP growth forecasts and an upward revision to inflation forecasts. A dovish BoE could see GBP erase its FOMC‑inspired gains in our view,” Kong and colleagues said on Thursday. 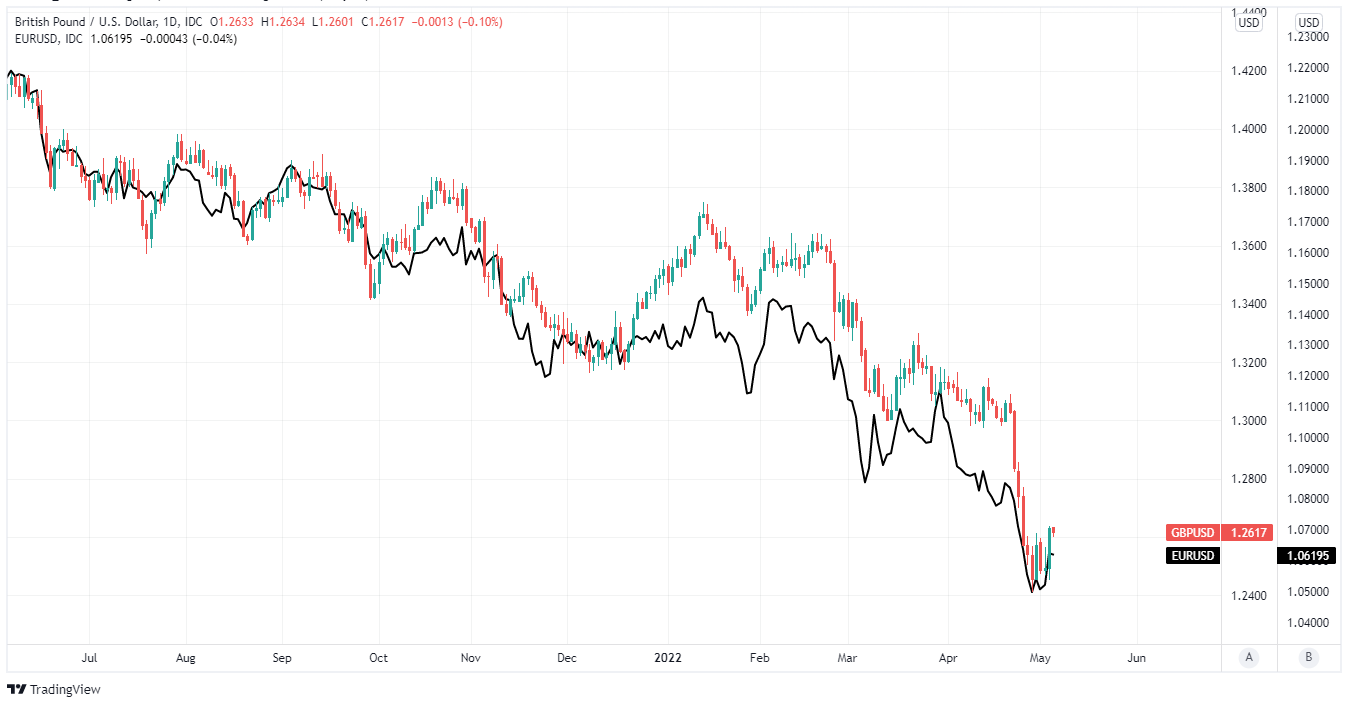 Above: Pound to Dollar exchange rate shown at daily intervals and alongside EUR/USD. Click image for closer inspection.

For the last year and a half, former perennial champion Jon Jones has been preparing …