Second Home and Investment Property Prices Up Nearly 20% in Q1 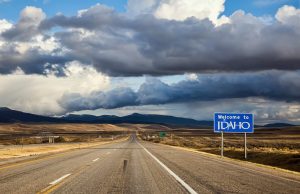 “Low inventory continues to fuel record high prices of both primary and secondary homes across the nation. With rising home prices and limited inventory, it is more important than ever to make efficient use of existing homes,” said Pacaso Co-Founder and CEO Austin Allison.

“The permanent shift toward work-from-home has forever changed the way people work and is giving second home buyers more flexibility to spend time away from their primary home and office,” said Allison. “Coupled with rising home price appreciation, demand for second homes in regionally-driven destinations is growing faster than premier destinations, like Aspen or Malibu. Communities within a short drive from major metros are gaining interest as many families are looking for a second home where they can spend more time living and working. Ease of access, proximity to outdoor recreation, and a desire for community connection remain key drivers in second home buying decisions.”

Cumberland County, Maine recorded the second largest growth in second home price in Q1 2022 with 91.3% increase year-over-year. Cumberland County is home to Cape Elizabeth, which is less than a 30-minute drive from Portland, Maine. 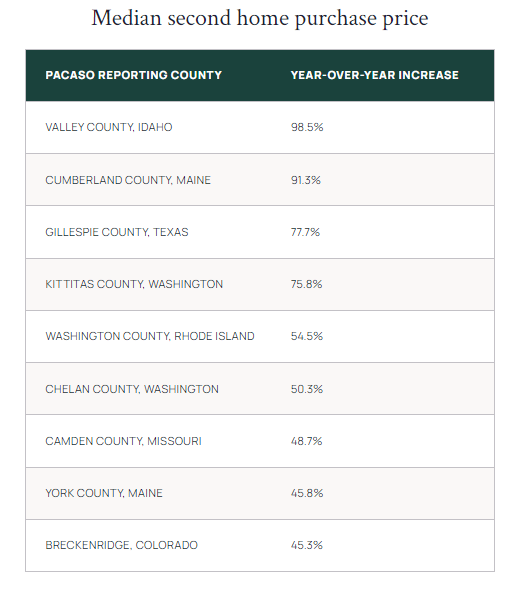 The third greatest growth in median second home price from Q1 2022 came from Gillespie County, Texas, which saw 77.7% growth in its median second home price compared to Q1 of last year. Located approximately 70 miles west of Austin, has increasingly become a popular wine-tasting destination. The price growth in Gillespie County is likely driven by several factors, most notably its proximity to Austin, one of the fastest growing tech hubs in the nation with a current metro area population of 2,176,000 in 2022, a 2.79% increase over 2021.

“Premier technology companies such as Oracle and Tesla have relocated their headquarters to Austin, and others such as Google and Facebook have expanded their presence in the Texas city,” said Allison. “The nearby boom and infiltration of tech money blended with the beauty of Hill Country probably explains the sharp increase in prices, as inventory remains low, and demand continues to outpace pre-pandemic levels nationwide.”

Nationwide, the share of second home mortgage rate locks was 4.2% in Q1 of 2022, 1.2 times above the pre-pandemic national average. In Q1 2022, Fannin County, Georgia, saw the largest growth in second home transactions, up 109.8% over 2021, which is only about a two-hour drive from Atlanta, making it a viable second home destination for those wishing to remain within driving distance of the Atlanta metropolitan area.