Is Dollar General a Potential

The US Dollar has steadied in the aftermath of Fed Chair Jerome Powell’s testimony to Congress.

He acknowledged that a recession is “certainly a possibility” and said that recent events have, “made it more difficult to achieve what we want, which is 2% inflation and still a strong labour market.”

He also said that the chances of achieving a soft landing for the economy was “very challenging.” Treasury yields were lower across the curve.

All the recession talk sent growth related currencies lower with the Aussie and the Kiwi hit the hardest.

Crude oil was sent packing, the WTI futures contract is near US$ 104 bbl while the Brent contract is under US$ 110 bbl. Gold is steady, just above US$ 1,830 an ounce.

APAC equities are mostly in the green to some degree today, with the notable exception being the growth sensitive Kosdaq index, down around 2.5%.

Elsewhere, USD/JPY went lower after former Japanese Vice Finance Minister for International Affairs Takehiko Nakao said that the current level of the Yen was not good for Japan’s economy. He said that the prospect of intervention, “shouldn’t be eliminated.”

Looking ahead, there are a series of European PMIs coming out as well a number of ECB speakers. Fed Chair Powell will also be testifying again later.

The full economic calendar can be viewed here.

The US Dollar index (DXY) remains above an ascending trend line and above the 21-, 55- and 100-day simple moving averages (SMA) but below the 10-day SMA. 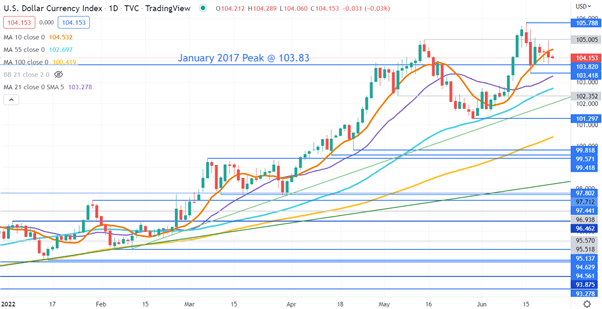